Johannes Möller is an icon of 21st century music-making in the classical guitar field. This world class musician usually performs a hundred concerts per year and has a large following all over the world. In 2010 he was awarded the first prize in the Concert Artist Competition Guitar Foundation of America (GFA), considered to be one of the most prestigious classical guitar competition in the world.
In 2018 he was appointed Ambassador of ZhengAn Guitar in China, which is the largest investment of it's kind in Guitar history. ZhengAn is a city in Guizhou which have made guitar manufacturing and guitar culture its main priority.
Today Johannes is also a guitar entrepreneur with his own high end brand, Sueño.

How come you chose the classical nylon-string guitar instead of an electric one when you were young?
– When I first started playing the guitar as a child, I wanted an electric guitar and even got one. But for some reason the classical guitar with nylon strings was always more attractive to me. On the electric you’re part of a band, but with a classical guitar you can create everything. It is a world of its own. It became clear right from the start that it is the right instrument for me.
Where do you live these days? You are born in Sweden, seem to be based in Holland but work in China?
– It’s such a simple question, but answering where I live is quite hard. I have different points in the world where I operate from.
– I am from Sweden, and was based in the Netherlands for many years. Since 2013 I have been working more and more in China. A couple of years ago, I even set up my own company there. So I usually I spend large parts of the year in China.
In 2018 you became the Ambassador of ZhengAn Guitar in China. Please explain how that happened and what it is that you do?
– The opportunity came about because before this I was the ambassador for the guitar brand Martinez. For about three and a half years we did so much work in China, touring with many concerts and setting up many projects to develop the guitar there.
– For me moving from Martinez to Zheng’An was a natural progress. Zheng’An Guitar is this huge industrial initiative in the city of Zheng’An in Guizhou, China. This is an area which is favorable for guitar manufacturers to set up their factories, and since it was first developed, Zheng’An has become this guitar phenomenon. At the moment it is the biggest guitar making zone in the world. Seven million guitars manufactured in 2019. 30% of all guitars exported from China come from Zheng’An
– I had a great time with Martinez, and when I was with them, I represented just one brand. In Zheng’An my job is to be the face of and promote this whole scheme: various brands, various factories, and of course creating and guiding the guitar culture of that place too. In my opinion, it would be hard to find something bigger or more exciting in the guitar world today.

As a classical guitarist, you work across a wide musical field. Do you have any favourite genre/composers?
– I am very interested in ethnic music or world music and bringing that to the guitar. The guitar is the perfect instrument to represent music from any country. It is one of those rare instruments which is most widely spread across the whole world, and developed indigenously in so many places. In Europe of course, but the guitar is it’s own instrument in Latin America, in Africa… It is used in different musical cultures everywhere you go!
How has your interest in Indian and Chinese music affected your repertoire?
– When it comes to Indian music, I have written many compositions based on Indian ragas and folk music called India released in 2016.
– The Chinese music came later. I find that Chinese music can be expressed very well on the guitar. The guitar resembles so many traditional Chinese instruments. Their music is very melodic and sweet. It’s perfect for classical guitar which can bring that sweetness and melodic lines out very well. Your technique is outstanding, the tremolo for instance, and you use it so effectively in your own playing.
– Thank you! Apart from traditional classical techniques like the tremolo, I use a lot of extreme harmonics, tapping and percussive effects. Also alternate tunings, this gives the guitar a whole new sound. These tunings have been a way to adapt various types of music, in particular for Indian music. Ragas are modal, so it was a key feature in my music inspired by India to retune the way that it suits each raga.
Your playing stands out as very soulful and expressive. You seem to be ”one” with the instrument and music. Can you explain your approach?
– Thank you for saying that! The way I approach composing and improvisation is very intuitive. I truly let myself be expressed through the instrument, transcending technique. One of my aims is for the guitar to become an extension of myself, more like a voice than a separate instrument. Just like with the voice I use a lot of vibrato and I always try to use a wide range of colors to achieve endless ranges of sounds.
Recently you´ve adopted the True Temperament Fretting System. What is your opinion about TT so far?
– I became aware of the True Temperament Fretting System about 10 years ago, but because of my various involvements with other guitar brands I was unable to fully explore this. That is one of the reasons I created my own brand – to fully explore the technical possibilities of the instrument and part of this was to use the True Temperament Fretting System.

Please check this youtube video where Johannes compare two exact Sueño-models, one with regular frets and one with True Temperament frets. 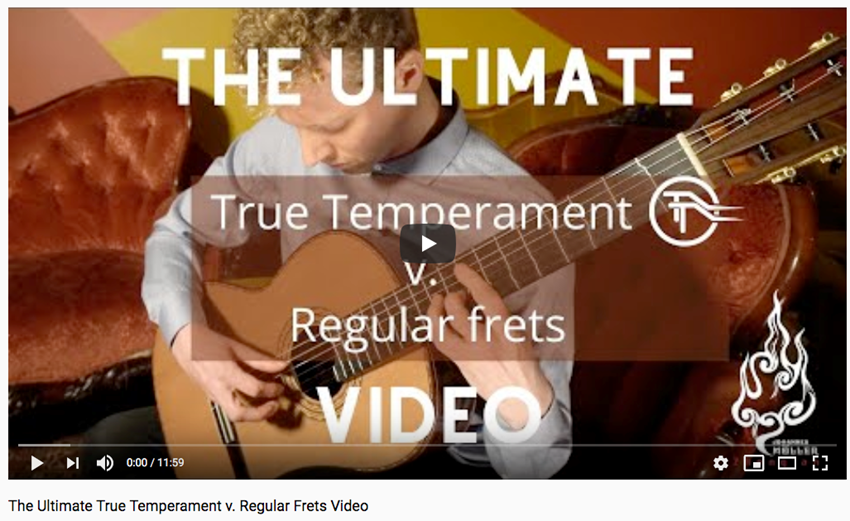 – I feel that the TT-system has opened a lot of possibilities and is expanding my artistic potential. I can move up the fretboard to higher positions and from there use open strings against high notes. These are some of the things that earlier would have been too out of tune to really present in a serious way.
– I’m really pleased with the close collaboration with True Temperament now in which we are able to fully adapt this system with other technologies like double tops. We now have instruments that are very good, very easy to play and completely in tune!
How different is a classical guitar with True Temperament frets compared to a guitar with straight frets?
– In a way, the True Temperament Fretting System is more important to the classical guitar than any other kind of guitar. We play so many voices and utilize so many different positions. I really think that this could be the key technological development for the instrument that helps the guitar become more accepted in the classical world
– In the classical tradition, we are used to an equal or well-tempered scale. This becomes particularly important while playing with other instruments. Equal temperament has been achieved for the piano a few hundred years ago. On unfretted string instruments you obviously need to do the intonation yourself. With the guitar however, standard frets make it always a little off key, almost like having its own temperament. While playing with guitar, violinists make small intonation adjustments, but nothing can be done for the guitar to be perfectly in tune with a piano.
– Most guitarists are used to the way a guitar sounds – that traditional “out-of-tuneness” that comes from a defect in technology. Some are actually quite attached to this ‘charming’ sound.
– I agree, there is a beauty in going out of pitch by bending a string. TT does not try to avoid that. With True Temperament frets, we can still bend a note or have a chord with a ‘growl’ to it. But you chose that by bending your finger instead of having that chosen for you by the instrument at certain positions. A guitar with the TT system sounds the way it is expected to sound
– In pop music too, the guitar is in decline. There is an increasing use of electronic sounds (which are always in tune). I expect that TT will impact a revival for the guitar here as well. I know that you soon will have your own brand with high-end guitars on the market. Can you describe the design and construction?
– Yes, my own brand is under the trademark Johannes Möller© and I am currently developing a high-end classical guitar series called Sueño as well as a high-end steel string series called Freedom. 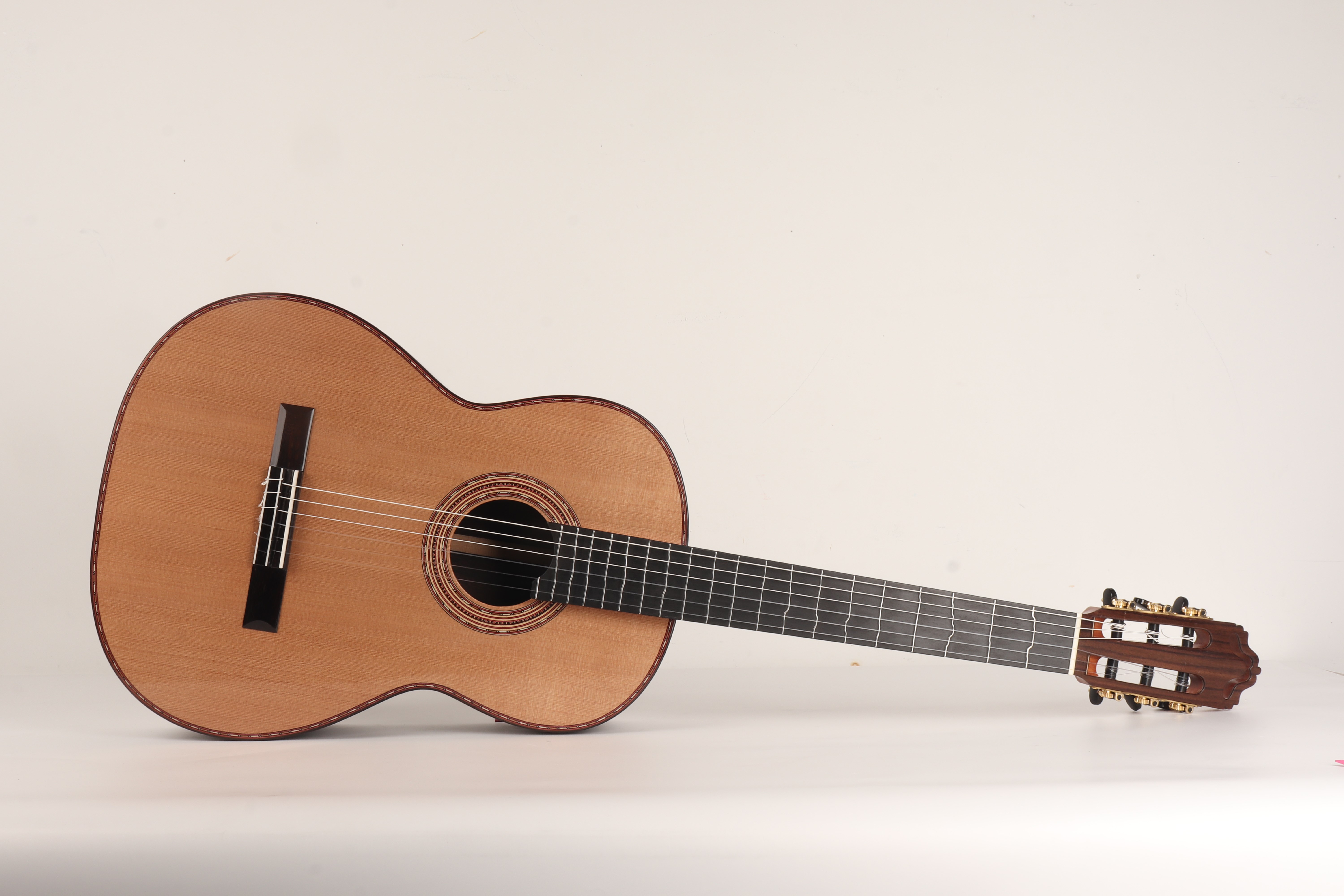 – It is pretty unusual for a guitarist to develop their own brand. It takes a long time and has involved a certain obsession. More than anything the brand represents a culture within the guitar. That’s why my company in China is called Guizhou Moller Cultural Development Company. We are trying to develop and define the culture of the guitar at large. We are designing a few different high-end handmade guitars. All French polished.
– I’ve been working in close proximity with production in order to achieve ultimate playability and good sustain. These are balanced instruments with a wide range of colors.
– One of the key features of these guitars is the True Temperament frets and this will make it the only brand in the world to only focus on TT.
– It’s been a search for the perfect instrument. And this resulted in founding my own guitar brand to develop that instrument. Because I played on so many guitars, I got comfortable switching between instruments and that is also why I became an ambassador for the guitar. High end and low end – I can play them all!
The covid 19 unfortunately dictates all artists' agenda these days. Normally you would tour, performing all over the world. What are your plans for 2021 so far? Musical projects, tours, etc.?
– 2020 was definitely an unusual year for all of us. I do expect things to change soon and have many plans for the future – concerts, new compositions, recordings, and of course development for my guitar company based in China with the rest of the world, including the production and distribution of the True Temperament guitars. A very exciting new project is the launch of the Guitar City Magazine about the culture of guitar all over the world – electric, acoustic and classical. The magazine will also have online collateral (videos, performances, interviews, etc) but our focus is bringing out the print edition for distribution worldwide.
– So, a lot of things are in the works, but the pandemic has given me the patience to keep plans on hold until it’s the right time to implement, and also the ability to make changes and adapt to new situations. Let’s see what follows, but I’m looking forward to a full year ahead! Ulf Zackrisson ©

09 October 2022
A most important person in the development of the True Temperament Fretting System is co-founder and senior adviser Paul Guy. In this article, Paul recalls the beginnings of True Temperament and how Anders and he developed what today is considered by many guitar experts and world renowned guitarists, to be the greatest improvement to the guitar in several hundred years.